This course will help you:

To receive CEUs and/or a certificate of completion, Full Students must:

To receive CEUs and/or a certificate of achievement, Auditors must:

This is a 5-week instructor-led course. Each week includes a recorded lecture, a scheduled live discussion, required readings, and guiding questions.

Week 2 - Puppies and the Development of Behavior

▪What issocial play? ▪Hypotheses and attributes concerning social play ▪Do puppies form play partner preferences and,if so, at what age? ▪What is the 50:50 rule in play? ▪Do puppies balance out taking turns being in the “top dog” and “bottom dog” roles during play? ▪An investigation of sex differences related to play ▪Relationships between variables commonly seen in play (i.e., self-handicapping behaviors, initiations, play bows, and assertive or “offense behaviors”)

▪What is the purpose of greetings? ▪Greeting examples from other species ▪Characteristics of dogs who are more likely to initiate and participate in greetings ▪Differences between reciprocated and unreciprocated greetings ▪How emotional states reflected in body postures are related to greetings? ▪How long do dog greetings last? ▪The role of olfactory investigations in greetings? 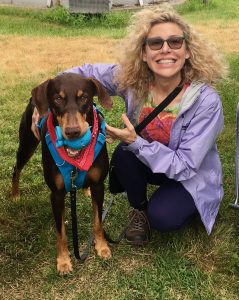 Dr. Camille Ward is the President and founder of About Dogs LLC, where she specializes in behavioral consultations for the prevention, modification, and management of canine behavior problems. Her philosophy stresses relationship building and working from the dog’s point of view.

Dr. Ward received her Ph.D. from the University of Michigan studying cognition and the development of social behavior in domestic dogs. In addition to her work on dogs, she also conducted behavior studies on crows, primates, and fish. She received her certification through the Animal Behavior Society as a Certified Applied Animal Behaviorist (CAAB).

Dr. Ward has lectured nationally and internationally at scientific and dog training conferences on canine behavior. She has published on animal behavior in a variety of scientific academic journals, and her work has been featured on MSNBC, in Cosmopolitan magazine, and in the Bark. She has also taught animal behavior to undergraduate students at the University of Michigan, and she designed and taught a seminar called Dog Cognition, Behavior and Welfare. She recently published a paper entitled: “Greeting Behavior between Dogs at a Dog Park” in the journal, Pet Behaviour Science. She also co-hosted a symposium on “Comparative Canine Behavior” at the 53rd Annual Conference of the Animal Behavior Society. The symposium was the first academic forum for canine behavior research in North America and included invited speakers from around the world to present their research on the behavior and cognition of both domestic dogs and wild canids.

Dr. Ward is on the Advisory Group of Dr. Marty Becker’s Fear Free Initiative, where the emphasis is on the emotional well-being of dogs during veterinary visits, grooming procedures, when working with trainers, and more. She also worked as an Animal Behaviorist for the ASPCA’s Anti-Cruelty Team, working with other professionals on the rehabilitation of dogs rescued from fighting, hoarding, puppy mills, and other forms of abuse.